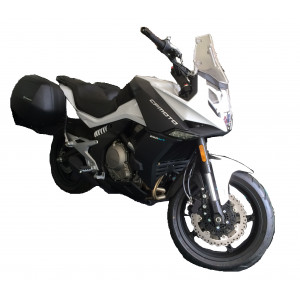 Finally sees the light of day in Milan, and is now on its way to Australia in 2017

CFMoto's oft-promised adventure touring bike based on its 650cc parallel twin platform has finally surfaced, and we’ll be seeing the 650MT in Australia in the first quarter of 2017.

It has been four years (2012) since the very first large capacity road bike from CFMoto, the 650NK, was introduced, and since then we've seen the 650TK tourer added to the line-up, and now finally the adventure tourer.

Compared to the NK, the MT adds longer travel suspension and new upside-down forks, a larger capacity fuel tank (up by one-litre to 18), a talker screen, and an extra 20mm ground clearance. The seat height is 840mm, and kerb weight 213kg.

It will track on tarmac-focussed 17-inch rubber.

“We are excited to see the 650MT to finally make it to Australia,” said CFMoto Australia Director Michael Poynton. “It will be great to prove how capable the CFMoto product is in the adventure touring market.

“The 650MT will be the bike to take you on your next weekend adventure and not break the bank.

It will be a highly capable and durable bike, just take a look at the 650NK.” Colours are royal blue or pearl white.